Imagination and The Tooth Fairy

One of my favorite things that I absolutely love and adore about children, are their wonderful imaginations. I feel like it's something that as we become older, the less we use, and it's honestly quite sad if you ask me. Almost anyone can remember the time when they dressed up as a little princess and danced around a room pretending they were in a magical ballroom, or dressed up as a knight with a styrofoam sword pretending to fight away the fire breathing dragons. How many of our parents have some kind of picture of us as children, with a cape on our back that immediately gave us superpowers?

The thing I love about my two little ones, is that they have the most amazing imaginations. I often do my best to encourage their little minds to work as much as possible, because I know how precious imagination is. For instance, my 4 year old son will often tell me that he "snuck out of the house while I was sleeping and drove around really fast with his Batman friends". Although I'm not sure how much I like this mentality for when he's older, for now I think it's great.

Going along with imagination...... enters the Tooth Fairy. Oh the infamous Tooth Fairy who steals our money and quietly sneaks in and takes all the credit. Well, when my daughter lost her first tooth she was ecstatic because she couldn't wait to see what this winged fairy would bring her. That night, I sat down and began thinking of ways to be creative instead of just putting a dollar bill under her pillow. From there, I put my thinking cap on and began to search the internet until I came across the most wonderful idea...... Money Origami. Still giving her the dollar bill that is expected from the Tooth Fairy, but making it just a little bit more special for my little princess.

This was what I came up with for the first tooth. Surprisingly enough, it was very simple. Often times you may need to pause the video to catch up however the instructions are very detailed. 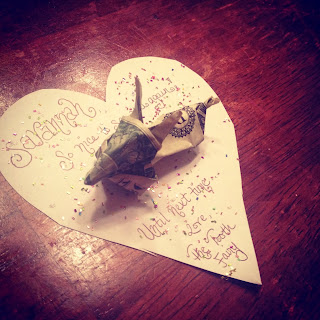 For the Puppy you will need:
1 Crisp Dollar Bill 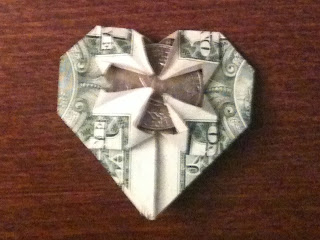 For the Heart you will need:
1 Crisp Dollar Bill
1 Quarter


You can imagine how thrilled my daughter was when she woke up in the morning to find this under her pillow. From that point on, the excitement won me over and I have continued to make these for her when she loses a tooth. These are some of the other ones I have also done. 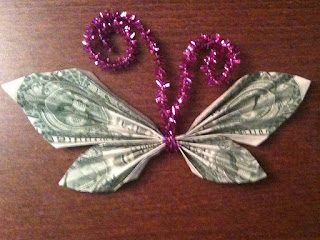 For the Butterfly you will need:
2 Crisp Dollar Bills
1 Colored Pipe Cleaner

Once I became pretty comfortable in making these (you can laugh but origami has never been my thing), I decided to go for something a little bit more complex. 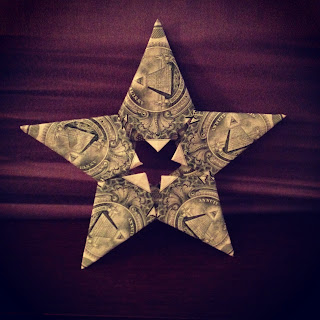 For the Star you will need:
5 crisp dollar bills


The most recent one I have done honestly just seemed like a fun thing to give my little girl. I'm not going to lie you though, this one took me MUCH longer than I would have hoped it to! The end result however was worth it. 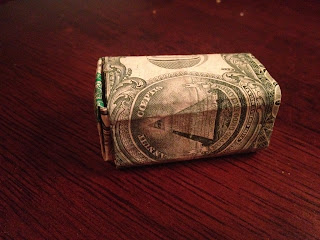 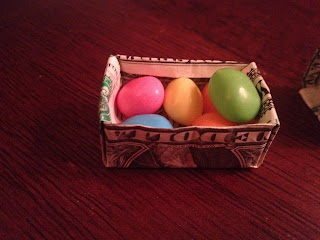 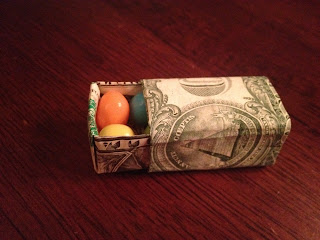 For the Box you will need:
2 Crisp Dollar Bills
Small Candies to Fill Box 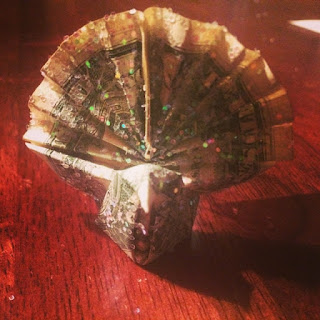 For The Peacock You will need:
1 Crisp Dollar Bill

Posted by Kimberly Noel at 9:26 PM